At the 73rd General Assembly of the World Energy Council Austria (WEC Austria) on 14 October 2020, Michael Strugl MBA, Deputy Chairman of the Managing Board of VERBUND AG, was elected as the new President for three years.

The meetings of the WEC Austria took place in Vienna on 14 October 2020. Due to the resignation of President Dr. Johann Sereinig, the 73rd General Assembly elected Dr. Michael Strugl, Deputy Chairman of the Managing Board of VERBUND AG, as the new President for three years. “The current COVID-19 pandemic and the global impact of the climate crisis underline the importance of a global institution such as the World Energy Council. Therefore, one of my objectives for my Presidency will be to strengthen the WEC in Austria”, said the new President. The aim of the World Energy Council Austria is to ensure a secure, resource-saving, economic, environmentally and socially compatible energy supply for Austria as a partner in an international environment. In Austria, the top players of the energy industry are represented and see the association as a platform for discussion, networking and the promotion of young talents.

Dr. Johann Sereinig had been head of the association since 2009. During his 11-year presidency, the WEC Austria was modernised and numerous new formats were established. One of the WEC’s flagship programmes, the Young Energy Professionals Programme, has been promoting young talents in the energy industry since 2015. In addition, on 24 November the WEC will organise the 3rd Vienna Energy Strategy Dialogue for the third time in cooperation with OSCE, IV and Ernst & Young. Since 2018 WEC Austria is also a member of the Vienna Energy Club. In recognition of his achievements for the WEC and the energy industry in Austria, Dr. Johann Sereinig was awarded the honorary presidency during the General Assembly. Prof. Dr. Günther Brauner, TU Vienna, was awarded honorary membership due to his active involvement in the work of the WEC and its events.

In addition, numerous new members were admitted to the WEC Austria at the event, including DAS Energy GmbH and nobilegroup. “WEC is a major player in the international discussion on the future of energy supply and the development of scenarios. The next decade in particular will bring many changes in the sector, WEC Austria will play a strong role and contribute to shaping this dynamic with its expertise”, said the new President Michael Strugl. 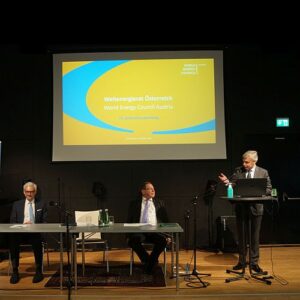