Energy system transformation, the future role of oil and gas and the future of mobility were at the centre of attention on May 28th, 2019 when the Young Energy Professionals from WEC Austria visited the OMV AG head office.

Mag. Manfred Leitner, CEO of OMV AG: “OMV is an international, integrated oil and gas company with consolidated sales of almost € 23 billion and a workforce of around 20,200 employees in 2018. OMV AG is one of Austria’s largest listed industrial companies. OMV produces and markets oil and gas, innovative energy and high-quality petrochemical solutions.  In the upstream segment, OMV focuses on the exploration, development and production of oil and gas in the five core regions of Central and Eastern Europe, Russia, the North Sea, the Middle East and Africa as well as Asia-Pacific. Daily production amounted to 427 kboe/d in 2018. While natural gas contributed 57% to production, crude oil accounted for 43%. In the downstream segment, OMV operates three refineries with an annual capacity of 17.8 million t/a and over 2,000 filling stations in ten countries. OMV has gas storage facilities in Austria and Germany; its subsidiary Gas Connect Austria GmbH operates a gas pipeline network. OMV sold about 114 TWh of gas in 2018.

Dr. Leopold Bräuer, Vice President New Technologies referred to the increasing importance of digitalisation in the upstream sector. Upstream begins with the search for oil and gas deposits, also known as exploration. It is the most complex and expensive, but also the most profitable part of the industry. “The better we know what it looks like underground, the more efficiently and safely we can drill the expensive wells,” emphasized Dr. Leopold Bräuer. Numerous geologists, geophysicists, drilling technicians, IT and visualization specialists work together to use seismological measurements to construct three-dimensional images of oil and gas deposits that are as realistic as possible. Millions of data points, whose analysis requires an extremely high computer performance, are used.  Dr. Bräuer also mentioned that OMV is one of the best operators of mature fields with the highest recovery rates and produces 20% to 60%  of the available oil depending on the reservoir and up to 90% from gas reservoirs.These outstanding figures are achieved through state-of-the-art technologies like water management, directional drilling technology and optimization of production pump runlife. OMV has been active in the field of exploration and production in Austria for more than 50 years. The country continues to play an important role in the company’s international oil and gas production programme.

Dipl.-Ing. Thomas Gangl, Senior Vice President Refining & Petrochemicals and designated member of the Executive Board of OMV AG: OMV operates a total of three refineries: one in Schwechat (Austria) and one in Burghausen (South Germany), with both refineries also producing basic petrochemicals, along with the Refinery Petrobrazi (Romania). OMV has a total annual refinery capacity of 17.8 million tons. At OMV refineries crude oil is converted into fuel, heating oil, bitumen and petrochemical products by means of distillation, desulphurization, refining and mixing. For years OMV has been proactively adapting its refineries to the changing needs of the European market and will continue to do so in future. By making targeted investments in existing plants, OMV has been able to significantly increase the proportion of middle distillates and petrochemical raw materials while also improving the cost position.

Mag. (FH) Michael Sattler, Head of Future Energy at OMV: Increasing energy demand, together with environmental requirements, will change the energy mix in the future. OMV leverages three value drivers in the innovation approach: new feedstocks, new technologies and new products. OMV believes that all forms of energy will be needed to meet growing global demand. The company also believes that governments, industry and civil society need to collaborate to build a cleaner future energy in order to meet these growing demands, whilst ensuring that global temperature rise does not exceed the 1.5°C limit, as set out in the Conference of Parties (COP 21) held in Paris in 2015. In order to meet these challenges, we invest in funds in researching and developing new energy sources and technologies.

Ing. Mag. Michael Woltran, Senior Vice President Gas Logistics underlined the importance of gas as part of a climate-friendly energy future. The existing gas pipelines and gas storage facilities can be used immediately and without additional costs for the use of renewable gas. On the one hand there is biomethane, which is already being used today as a fully-fledged natural gas substitute. Added to this is synthetic gas, which is produced from renewable electricity. Power-to-Gas technology can be a major driver and lever for decarbonization, especially in the transport sector.

Mrs. Ulrike Hinz, MA, MBA from the World Energy Council Germany gave an overview of the Young Energy Professionals Program of WEC Germany and referred to the Young Energy Forum. The conference brings together around 35 under-35-year-olds from the entire energy industry, as well as from politics, science and the media. The theme of the next event, to be held in Berlin on June 7th, 2019, will be “Urban Energy Turnaround”.

We would like to thank OMV for the invitation. 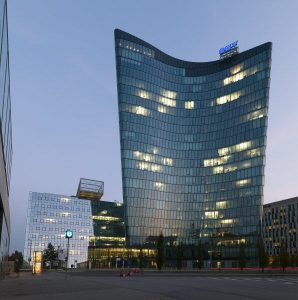